(Disclaimer: Jonathan Sherlock was both a beta tester and a kickstart backer.) Traveller 5th Edition (T5) is an ambitious reconstruction of Traveller. The central mechanic, the task system, combines “roll under a characteristic” with the universal task system. The core of T5 also details basic assumptions about range, time, and money. All of these benchmarks are used repeatedly throughout the T5 core rules, making the game system both consistent and flexible.

The Traveller tradition of characters who are generated with some life history continues. But careers have been consolidated into 13 types, although some of them have many sub-types. The emphasis is on fluid, quick play while constructing a character history and defining their abilities. The different careers now have slight variations on how terms are resolved, stimulating the imagination for a character’s history in different ways. Characters can be of any Sophont species, and the Sophont generation rules plug-in directly to character generation. Built into the core character generation rules are the possible variations for non-Human Sophonts. More on this later. Skill acquisition now makes a distinction between Skills and Knowledges. There are a defined list of Skills, but most skills are further divided into Knowledges which can be added to in a flexible manner. For example, Fighting is divided into different kinds of knowledges associated with different weapons – but Referees are free to add new Knowledges as the needs of their campaign dictate. Characters perceive the universe with five standard senses (well, OK – reduced to four by combining smell and taste), but the rules systematically allow for extension beyond Human norms, and additional non-Human senses. Interpersonal interactions also get an entire chapter, such that the game not only simulates combat, but other forms of interaction.

Combat is highly abstracted, and does not include detail such as ammunition tracking and line of sight. The view is that there are two sides, we have a rough idea of the terrain, the two sides are either closing or withdrawing, and they are shooting / hacking at each other. Resolve damage, and leave it at that. This may present some problems where an exciting situation based on three positions in a triangle, or an enemy running away from some players while chasing others. The Makers mean that every conceivable piece of equipment in the full range of Traveller combat technologies can be easily designed with a few simple choices. With the QREBS innovation, the rules cover all devices from beginning faulty prototypes to advanced tech ultimate versions.

Starship Design returns to the Classic Traveller mold. Take given hull sizes, configure them, and plug-in the required locomotion, weapons, and other utilities. Only two design constraints are used – cost and hull volume. The design system acknowledges the lessons learned from earlier systems, and is vastly easier to use than either MegaTraveller or TNE. This allows for quick imagining of ship missions and then designing them by selecting options. The design system only covers Adventure Class Ships – that is, ships the players are likely to own or commonly contact. Future T5 supplements will include Battle Class ships.

The core World Building mechanic remains unchanged from Classic Traveller – all Traveller fans will still be able to read UWPs. An interesting addition is “hospitable zone” worlds that are an orbit either side of the traditional HZ, for hot and cold (but hospitable) worlds. System generation still uses similar mechanics that started with Classic Traveller Book 6. What has been added is a detailed chapter on building world maps. The mapping in T5 also “zooms in” on individual world hexes, facilitating detailed mapping. How the world surface interacts with vehicles and travel is now clearly and systematically laid out. Beasts that might live on worlds are now described and rules for taming them are included. They are no longer just annoyances for players or a possible source of food. This reviewer would enjoy a future World Building Supplement in the style of Digest Group’s publication for MegaTraveller for fleshing out further detail.

The EPIC adventure format is a clear framework for scripting adventures. It follows the standard narrative convention (orientation, complication, resolution) but allows for events to unfold in different orders depending on the action of the players. An interesting aspect of this adventure format will be how it plays out when players want to shove things in their own direction. This latter sandbox style play might need some juggling to fit in an EPIC adventure format: but the question of balancing story progression with player initiative is as old as role play gaming itself. Psionics fit neatly within the skill and attribute systems established in Character Creation. A huge variety of robots and synthetic life forms fit neatly into the universe, and without complex vehicle design construction rules. The focus is kept on imagining classic science fiction elements.

The chapter on generating sophonts excited me the most. Millions of possibilities are consolidated into tables and charts that stimulate the imagination. The Referee is encouraged to select options as much as roll randomly. No alternate careers are presented for non-Human species, and all statistics for any species are now standardised – but the system allows for millions of possibilities. This means future Alien supplements will focus much more on culture, role playing and stories than on presenting charts and statistics. Any Sophont generated by the Referee can be immediately used in Character Creation, and equipment that is specific to that species can be designed in the Makers.

I loved MegaTraveller. But after coming back to Traveller after many years, I started realising just what a nightmare the vehicle / starship design system really was. I am a bit of a gearhead. But now that I Referee for a mix of 9 and 11 year olds (with another friend who is my age who helps the play along by being a good PC). What keeps them entertained? A moving storyline! I want to be able to grab the props I need quickly, with ready to go stats that suit the story, and be able to make them up quickly to account for unforeseen circumstances. Sure, most equipment the players will come into contact with will be in the standard lists. But now we can customise equipment for different worlds, sophonts and environments. The Benchmarks established early in the book come into their own in the Makers. The QREBS system is mostly a way of adding flavour to the game – how reliable is that equipment? What is its quality? Will it break down at an inopportune moment? But when coupled with TL’s, we can quickly create that early prototype Plasma Gun at a lower tech level, with the resultant higher cost and bulk and lower reliability. The QREBS system combined with the various Makers make it possible to populate the Traveller Universe with all kinds of early prototype through ultimate hi-technology examples of the same item. This makes sense: a TL15 combat rifle would perform better than a TL7 one, even though TL15 troops would probably use energy or gauss weapons. Vehicles are now straightforward designs around an array of missions and technologies. It is possible to quickly create air ships, cars, grav tanks and nautical craft, and all of them fit straight into the travelling and combat rules. The chapter on Money comes into its own with ThingMaker. Now that the Credit has been standardised to 15 minutes of unskilled labour, this means that Cr4 can be considered the minimum wage. In an Australian context, the minimum wage is $15.96 per hour – say $16. This means that Cr1 is approximately $AU4, which gives a starting point for costs for Referee invented items. The minimum wage varies by country and there are limits to how far you can take this, but T5 lays out a system that fits together.

Unfortunately, T5 went to press with substantial errata. The errors in the print edition I have found include tables with headings one column shifted and the like. There is a growing errata document on Citizens of the Imperium. Fortunately the electronic versions of the rules can be re-issued easily; unfortunately the lovely printed book is harder to fix. Ultimately Marc Miller and Don McKinney had to make a call on getting the books to the printers. Without a deadline, nothing gets done and projects sit around and get stale. So my criticism is one of degree rather than kind – it is my belief the project would have benefited from a longer time for beta testers to read the document. As a community, a set of beta test activities could also have exposed errors or unexpected results in the rules.

The presentation is kept simple in the style of the Classic Little Black Books, but is now One Big Black Book. Well loved illustrations taken from JTAS abound, especially the very recognisable work of William H. Keith. As a personal aside, his illustrations always gave Traveller that gritty feeling of a Film Noir like The Third Man or The Long Goodbye. The order of chapters can seem confusing – there is a lot of information to take in all at once. The Introduction chapters go beyond “what is a role playing game?” to deeper questions about what makes travelling an adventure. It also clearly delineates the boundaries of Traveller – which means it will continue to develop its jointly shared canon while making that universe flexible for visitors and anyone who wants to modify or provide an alternative. Conventions, benchmarks and measurements are provided for in their own section. Only some of this information needs to be read in detail by the beginning player. The chapter on dice rolls at first glance seems a waste of pages, but during a game when the Referee is trying to convince the players that they are not just being “unlucky” it will prove a useful reference. The Player’s Book will be a welcome addition to T5 so that Referees can lend / give players a book to get them started without overwhelming them. In the meantime, Referees will need to guide newer players into the game.

Traveller was never a conventional role play game. It always had a feel of a Referee managing a simulation to some extent. The layout of the T5 One Big Black Book is not conventional. T5 takes the strengths from previous systems and forges them into a new game that will cover all Traveller canon periods and allow Referees to generate their own ideas for play. All interaction between characters and the universe around them has been systematically and carefully laid out. Although there are substantial errata that need fixing over time, this core rule book is a solid foundation for the rebirth of Traveller. 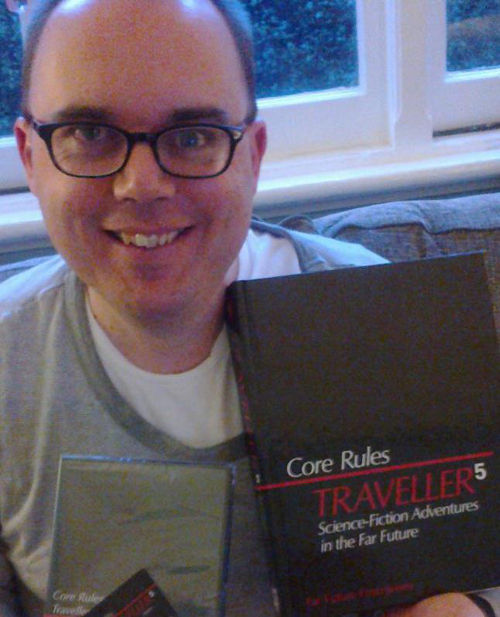 Edited May 27. Just one paragraph that might have been confusing.