The contents of Spinward Encounters are really really good. I love adventure, and this book is packed with them. There are 64 Patron type Adventures (4 for each subsector in the Spinward Marches), and 16 Amber Zone type adventures. Many of these are well thought out, and are a bit longer than a normal (classic) patron or amber zone. A nice thing about a few of the amber zones in the District 268 is that the referee can connect them into a mini campaign. 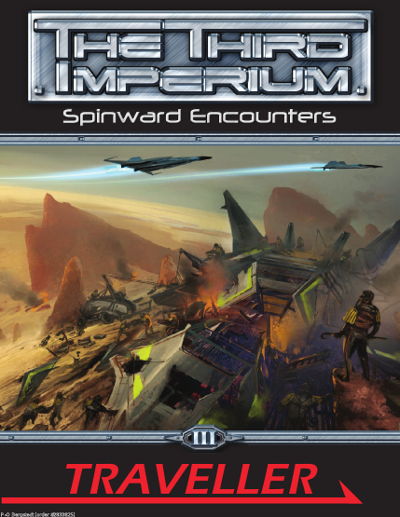 As a referee, you might think that only four adventures for each subsector makes this product a bit overpriced. But if you are playing in one of the two most popular subsectors (Regina or District 268), then it would be easy to lead your PCs into the five adjacent subsectors. Then you would have 24 useful patrons to play, and for Regina five extra Amber Zones, and for District 268 nine extra Amber Zones. If you play in any of the Vilis, Lanth, Sword Worlds or Lunion subsectors, then you can use 36 patrons if you let you PCs travel into neighbouring subsectors.

The problem with this book is that the layout is quite bad, and that there is no proper index. An index is something that would be very useful if you want to plan to integrate any part of the book into your campaign.

There are a few nice images in the book. I like the one with a Bwap and a Vargr on page 33. This image is probably meant to illustrate the patron at Jesedipere at page 16. As I said, the layout is quite bad… In this image you can spot the Serenity in the background. Maybe also in the image on page 27. That was a nice Easter egg. LOL!

I decided to make a quick index, so you quickly can see if your PC group is at a place where the referee can run any of the adventures in the book. The patrons and amber zones are in the same order as in the book. The patrons are sorted by subsectors A-P in the Spinward Marches. The planet listed is a suggested starting place. This is not always the same as where the adventures takes place.

4 thoughts on “Spinward Encounters – Adventures in the Spinward Marches”